About two months from now, I will be offloading zucchinis to anyone who will take them, perhaps swapping them for stone fruit in my local barter group. But right now, I’m enjoying the magic of the first harvest. Of small, emerald green zucchini and flowers like sunshine, drawing in the bees. 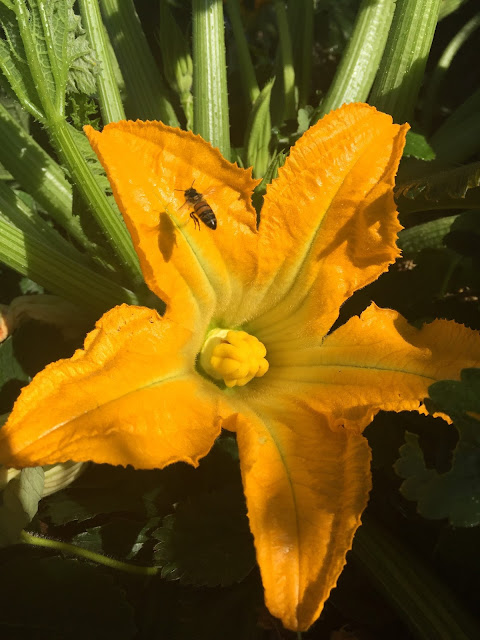 I grow zucchini every year – you can read how here. There will be a time for roasting or grilling or steaming them, but at the start of the harvest I love them in a simple salad. Pick or buy your zucchini small and sweet, and shave them into delicate strips. Toss them into a simple salad with nuts, fruit, and other greens of choice. Wild purslane has appeared in the path beside my community garden plot, so I'm using it in my salads as well. 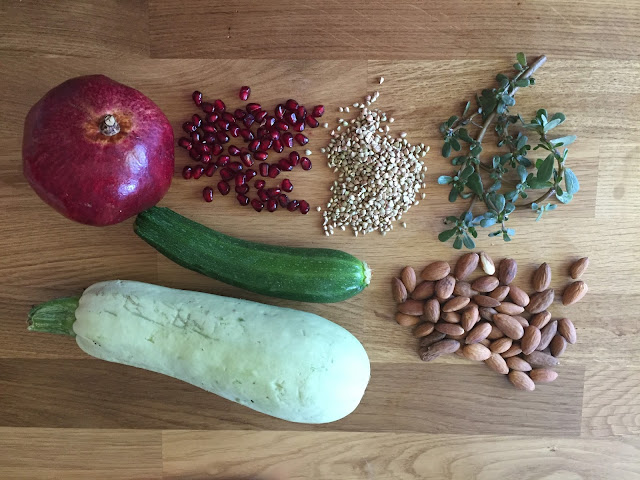 This recipe is for a salad of textures as much as it is of flavours. The burst of bright juice from every pomegranate seed. The cool silk of the zucchini. The subtle herby velvet of the purslane. The nuttiness of the buckwheat. The sweet crunch of almond, and the sharp acidity of the vinaigrette. It’s a true summer salad. 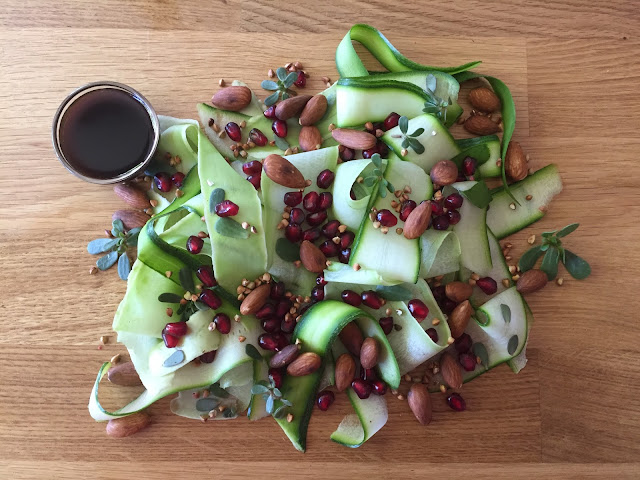 Zucchini, almond and pomegranate salad
Serves 1 as a main or two as a side 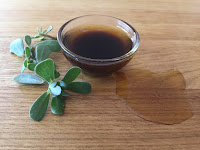 Toast your nuts and seeds in a dry frypan over a medium heat, stirring or tossing them for five minutes, then set aside to cool. Using a potato peeler, mandolin or a sharp knife, shave the zucchini into strips. Collect the seeds from your pomegranate (or chop your fruit) and slice your greens. Toss these all together and arrange on a plate. Put the molasses and oil in a small jar, screw on the lid tightly and shake well. Drizzle over the top and serve immediately. 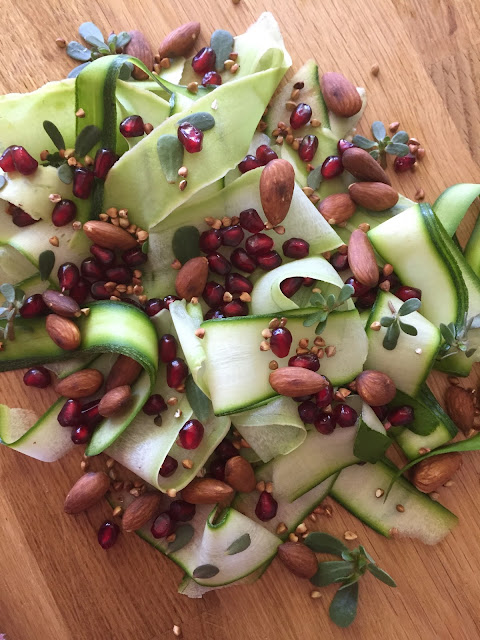 
My family celebrates Christmas with a vegan and gluten free meal – it’s getting better every year too, as we discover and perfect great recipes. We also come out of the meal feeling satisfied but not overly stuffed as can often occur with the usual celebration.

This year I took charge of dessert. I made a stupendously good, brandy-soaked traditional pudding and surprised everyone, including myself, with this beautiful layered konnyaku jelly. 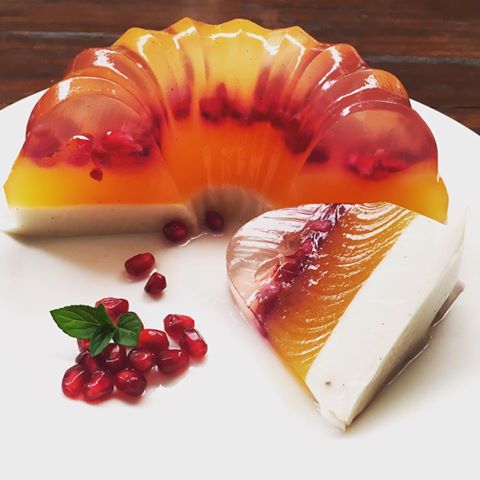 When I first discovered konnyaku jelly it was a revelation – it was so firm I could pick it up with my fingers, and when I bit into it, the jelly was light, refreshingly sweet and actually crunchy! I’d never had jelly you could chew before but it was delicious.

Konnyaku comes from pounded roots of a yam-like plant called konjac, and has little flavour of its own so can be used as a base for all sorts of interesting savoury and sweet jellies. I found it at a local Asian grocery store. 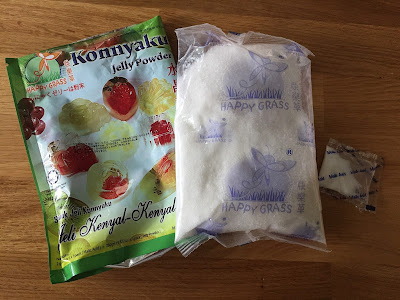 Christmas was the first time I had made the jelly myself and it was so good it’s worth sharing.

Boil the water. Put the packet of jelly powder in a pot and pour in the water, whisking to avoid lumps. Bring to a boil then turn the heat down to a simmer for three minutes, continuing to stir. Turn off the flame and stir in the malic acid sachet that comes with the powder.

Add the vanilla bean seeds and rice malt syrup, stir to combine, then separate the jelly into three portions. To the first portion add another 100ml of boiling water, stir well and pour enough into a metal bundt cake mould to fill the first third of the mould. Sprinkle the pomegranate seeds into it and set aside for 10 minutes. To the second portion add 150ml apricot nectar and heat gently, stirring, until the two liquids combine. Gently pour this layer over the first. To the third portion add 150 ml coconut cream, using the same approach, and add this layer to the mould. Refrigerate the jelly overnight to set fully.

To remove the jelly from the mould just push gently on each side of the jelly to release it, then flip the mould onto the plate and lift – the jelly should slide right out. I served it with extra pomegranate seeds.

I poured the excess jelly into small silicon chocolate moulds. These jellies could be pushed out of their moulds and eaten after just 10 minutes. 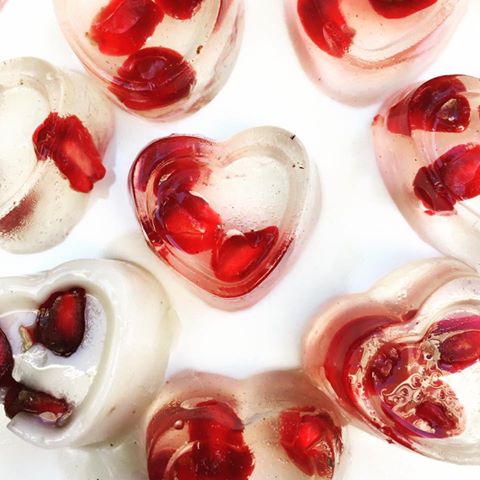 
As a gardener, I eagerly anticipate every season: apricot season, broccoli season, broad bean season, asparagus season and – hooray – strawberry season. Right now is the best strawberry season I’ve ever had, and I can only put it down to the incredible rain we had over winter. And the fact I let the runners from all of last year’s strawberry plants grow into a bajillion new plants. 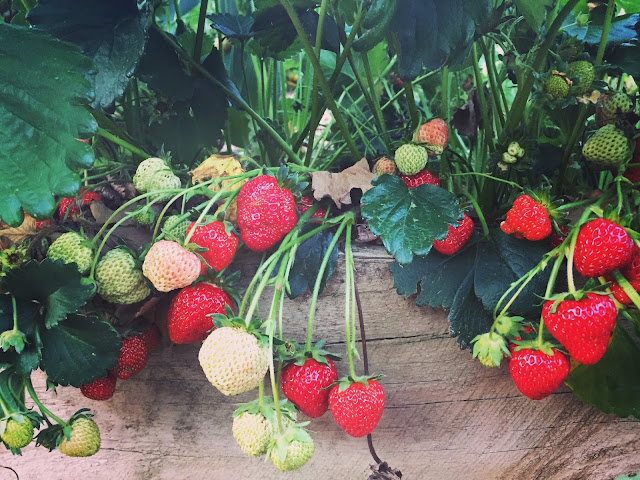 Strawberries are super easy to grow. You can always buy a plant at your local nursery but if you have a friendly gardener and a bit of patience, wait until the end of strawberry season when the plants put out runners. This means they literally grow another strawberry plant, which they plant nearby, all by themselves. 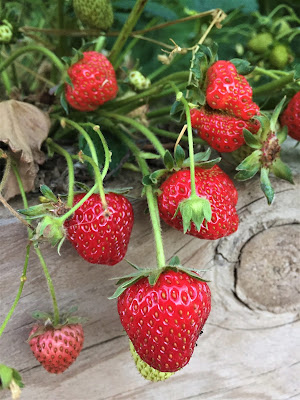 Give the new plant time to grow some roots then cut the stem that’s connecting it to the mother plant and transplant that baby to a sunny new home in rich soil that’s full of compost. Mulch around the plant and under the leaves to stop mud splashing up and damaging the fruit. Water regularly until the plant settles in and again when it’s flowering. Ease up on the water when the flowers turn into fruit as too much water can spoil strawberries. Pick them when they reach the most beautiful deep red, but before the slaters get to them or they go mushy. 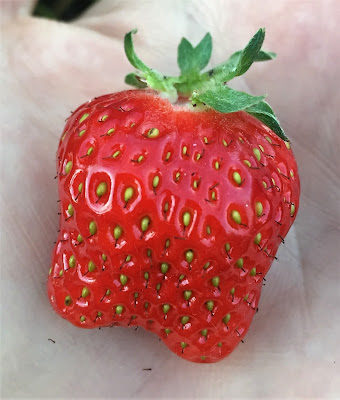 Like most berries, strawberries taste best when eaten within about 15 seconds of picking – the supermarket versions can’t even hope to compete. If you have too many to eat fresh, you can simply freeze them and use them in smoothies, or you can try this delicious strawberry, coconut and praline trifle. The brandy strawberries can be used within two days but will last much, much longer if you can hold out that long. If you’re not a fan of brandy, try white rum, vodka or even balsamic vinegar, or simply roughly chop fresh strawberries, add some finely chopped mint or basil, and use that as the berry layer.
For the praline, I’ve used I Quit Sugar’s method but substituted the nuts for buckwheat, almonds and sunflower seeds – feel free to use which ever nuts or seeds you have available.

3-7 days out
If using the alcohol/balsamic vinegar option, halve or roughly chop a cup of strawberries and loosely pack into a clean jar. Add brandy (or your preferred liquid) until the jar is approximately two thirds full of the liquid. Screw on the lid and stick the jar somewhere out of direct sunlight for at least a few days. 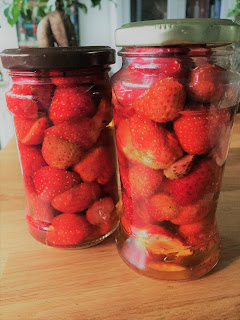 24 hours out
Refrigerate a can of good quality, pure (no guar gum) coconut cream – you need to do this at least several hours in advance.

On the day
To make the praline, preheat your oven’s grill to high. Gently warm the rice malt syrup in a small saucepan on the stove, stir through the nuts and seeds, pour onto a lined tray and stick under the grill for five minutes until the syrup is golden and bubbly (don’t let it or the nuts burn). Cool completely then pulse in a food processor or roughly chop. If making early, store in an airtight container. 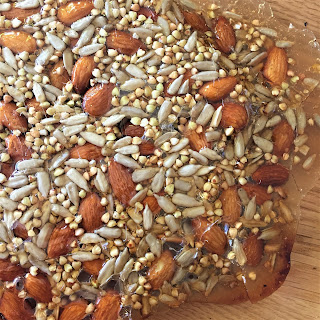 Building your trifle
To make the whipped coconut cream, get the can from the fridge, open, and scoop out the cream, leaving behind any liquid left in the bottom. Don’t shake the can at all to ensure the cream and the liquid stay separate. Put the cream in a bowl with a drizzle of vanilla essence and a shake of cinnamon, and whip gently until smooth. 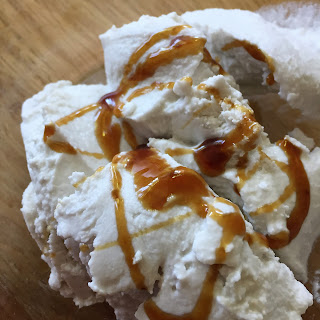 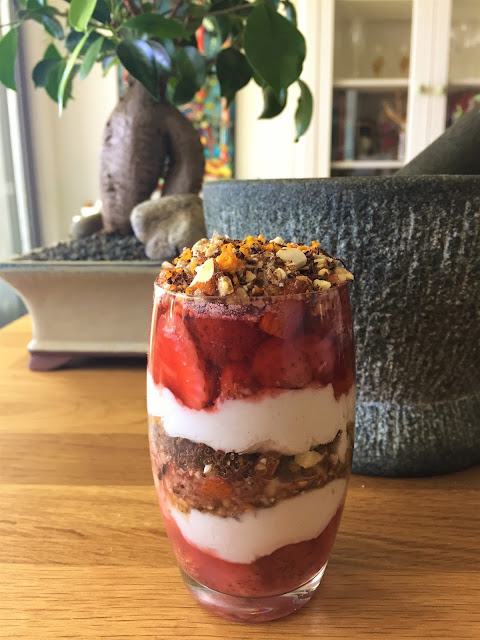 Diana
Diana lives in Canberra and has a passion for growing, cooking, and eating delicious, living food. She is a member of the Canberra Organic Growers Society and The Diggers Club, and has a happily overgrown, highly productive plot at her local community garden. Diana can be found on Facebook by searching for Diana's Green Table.